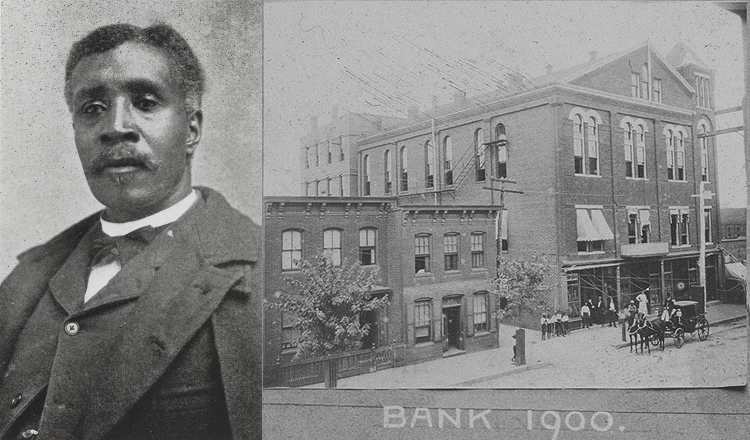 Browne was born a slave in Georgia in 1849. Browne would later escape and join the Union Army in the North. After the Civil War, he would found the Grand Fountain United Order of True Reformers, a Black fraternal organization. Then in 1887 Browne visited Charlotte County, Virginia to establish the True Reformers but he encountered some issues. The branch arranged to keep its savings with a white shopkeeper in the county but with racial tensions high in the area after a lynching. the shopkeeper told other white residents that local Black people were organizing and raising money. Therefore, the branch was forced to disband. Browne then made the decision the True Reformers would have to found and run a bank itself to ensure their finances couldn’t be monitored by white people.

The Savings Bank of the Grand Fountain United Order of True Reformers Bank initially operated out of Browne’s home located at 105 West Jackson Street in the Jackson Ward district of Richmond, Virginia. The bank’s first day’s deposits totaled $1,269.28. In 1891 the bank would move a few blocks away to 604-608 North Second Street. The bank would grow and survive the financial panic of 1893, during the time they were the only bank in Richmond to maintain full operation honoring all checks and paying out the full value of accounts.

Browne passed away in 1897 but the bank continued to thrive even after his death. The bank would expand into various other services including a newspaper, real estate agency, a retirement home, and a building and loan association. They opened new branches as far as Kansas and by 1900 the bank was operating in 24 states owning property valued at a total of $223,500.

The bank’s prospects, however, started to fall under its new leader Reverend William Lee Taylor. Branches were poorly regulated, and the strict rules the bank had required for its operations in its first years were allowed to grow lax. Under Taylor’s leadership, the bank made large, unsecured loans to finance lodge projects. Those loans often defaulted. When the bank’s cashier, R.T. Hill, was discovered to have embezzled $50,000 from the company, the resulting scandal brought down the bank, and most account holders lost their savings. The bank examiner of the banking division of the State Corporation Commission ordered the closure of the bank on October 20, 1910.