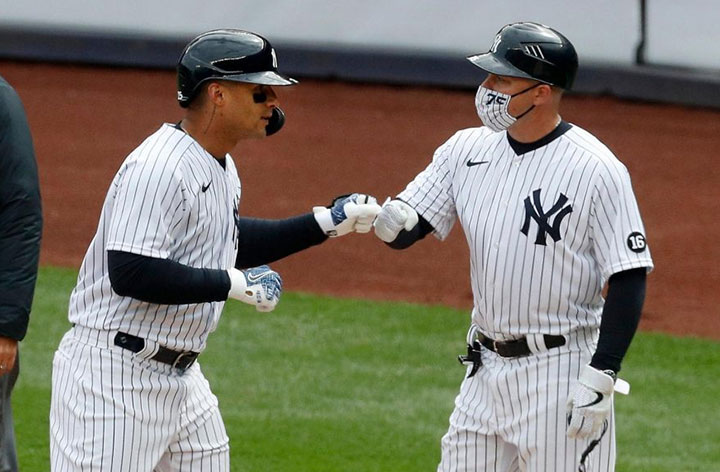 WASHINGTON — Great to see ya, Buster Posey. Been a while, Tony La Russa. Good luck, Madison Bumgarner and every other National League pitcher toting a bat. From Comerica Park to Coors Field to the Coliseum, Major League Baseball is set to roll out a big welcome mat Thursday. Most of all, this opening day, it’ll be for the fans. When Gerrit Cole throws the first pitch of the season — weather permitting — nearly 11,000 people could be at Yankee Stadium. Healthcare workers will celebrated, and everyone will sit in socially distanced seats and wear masks, inside a park that will continue to operate as a mass coronavirus vaccination site.

Far from normal. But after a year in which fans weren’t permitted at any regular-season game because of COVID-19 protocols, no longer will “Take Me Out to the Ball Game” strangely echo around empty ballparks during the seventh-inning stretch. “That’s how it’s supposed to be, I think,” said Bumgarner, ready to start for the Arizona Diamondbacks against Fernando Tatis Jr., Manny Machado and the San Diego Padres.

RELATED:
Scoring Opening Day Padres tickets is expensive, better deals to come “That’s what we’re doing. It’s an entertainment business. We’re all playing a game and competing and everyone’s got their team they pull for or just likes watching the game in general,” he said. Missing opening day, however, will be five players on the Washington Nationals. One of them tested positive for the virus this week — remember, last year Nats star Juan Soto had the virus and missed the opener. “Everybody across the game — we had seen so few positive cases across spring training as a whole,” Nationals ace Max Scherzer said. “It just shows you how quickly that can turn. It can turn on a dime. We have to face it, and we have to overcome it.” Crowd sizes will vary around the majors.

A worker cleans seats to prepare Coors Field for the return of fans in the era of the coronavirus during a news conference Wednesday, March 31, 2021, at the stadium in downtown Denver. A small number of fans were allowed to watch the Rockies go through a workout Wednesday before the team hosts the Los Angeles Dodgers in the squads’ season-opener Thursday, April 1. (AP Photo/David Zalubowski) At Globe Life Field in Texas, where the Rangers open Monday, a full 100% will be permitted. The Rangers didn’t have any fans in their $1.2 billion palace that opened last year during the pandemic-shortened 60-game season. But 11,000 spectators were inside the Arlington, Texas, park when Clayton Kershaw, Mookie Betts, Corey Seager and the Los Angeles Dodgers beat Tampa Bay in MLB’s first neutral-site World Series.

Boosted by signing NL Cy Young Award winner Trevor Bauer, the pitching-rich Dodgers start in Colorado, trying to become the first repeat champions since the New York Yankees in 1998-2000. Kershaw gets the opener against the Rockies, while Bauer goes in the second game. “I’m pumped up for it. Especially pumped up to get back in front of the LA fans for my first home start,” Bauer said. “This is going to be cool, putting on the Dodger uniform, playing with this group of guys. I’m really pumped up that baseball is back, especially now that we get to have fans in the stands,” he said. How many will actually be in the box seats and bleachers on April Fools’ Day might depend on the weather. The Boston Red Sox made the call early in the morning to postpone their game Thursday against Baltimore because of rain.

Rain is forecast early in the day for New York and Philadelphia as well. Same in Washington, too, where a marquee matchup is waiting at Nationals Park: Two-time Cy Young winner Jacob deGrom of the Mets faces Scherzer, a three-time Cy champ.

RELATED: Opening Day at Nats Park is going to be cold. Here’s how weather influences baseball games Temperatures are supposed to be in the 30s with gusty winds at Wrigley Field when Kris Bryant and the Chicago Cubs host Pittsburgh. Also in the low 30s in Detroit, where Cleveland ace Shane Bieber faces the Tigers, and chilly in Cincinnati, where the Reds take on St. Louis newcomer Nolan Arenado. Jack Flaherty pitches for the Cardinals. Two teammates from his Southern California high school a decade ago also start on opening day — Max Fried for the Braves in Philadelphia and Lucas Giolito for the Chicago White Sox against Mike Trout and rejuvenated two-way star Shohei Ohtani at Angel Stadium.

Arenado and Bauer are among the many stars who switched teams in the offseason. The Padres acquired Blake Snell and Yu Darvish, the Mets traded for Francisco Lindor, the White Sox added closer Liam Hendriks and the Yankees hope low-risk moves for Corey Kluber and Jameson Taillon pay off. Some teams will benefit from getting their own players back on the field. Posey of the Giants, Ryan Zimmerman of the Nats, David Price of the Dodgers and Marcus Stroman of the Mets were among those who opted out of playing last year because of coronavirus concerns. A six-time All-Star and three-time World Series champ, Posey liked what he saw in spring training.

“Watching the games on TV last year and seeing just cardboard fans in the stands, it was definitely nice to see some live humans out there,” he said. A more curious sight: La Russa, at 76 years old and already in the Hall of Fame, returning to manage the fortified White Sox. His last time in the dugout was 2011, in a World Series Game 7 win for the Cardinals. Alex Cora, who guided Boston to the 2018 crown, rejoins the Red Sox while AJ Hinch takes over the

Tigers. Both managers were suspended last year for their roles in the 2017 Astros’ sign-stealing scandal. Also around the bases:

THE GROUND RULES
Some of the experiments that debuted last season are back: seven-inning doubleheaders, automatic runners at second base to start extra innings. The expanded playoff field is back to 10 teams, down from 16. And the designated hitter in the National League is gone. That means pitchers who usually flail away will try to make contact after a year layoff. The DH could become permanent in the NL next season. In the meantime, those pitchers could get help on the mound as MLB is trying out a slightly deadened baseball that supposedly doesn’t fly quite so far

DEBUTS
Supremely qualified, Kim Ng finally got her chance and begins the season with the Miami Marlins as MLB’s first female general manager. “Failure is not an option for me,” the 52-year-old Ng said. … Forced out of Canada because of the virus, the Toronto Blue Jays will play their home opener April 8 at their spring training field in Dunedin, Florida — about 1,275 fans will be allowed at 8,500-seat TD Ballpark.