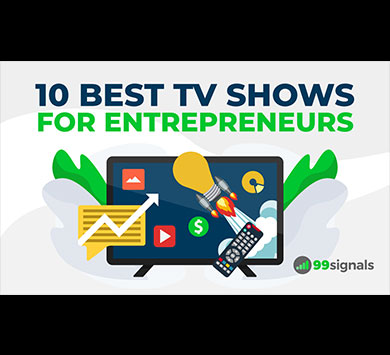 If you’re an entrepreneur and an avid watcher of TV shows, you may be wondering if there are any shows out there that can help you become a better entrepreneur.

To that end, here are the 10 best TV shows for entrepreneurs.

Created by Mike Judge, Silicon Valley is a critically-acclaimed sitcom that follows the struggle of a group of young software programmers and developers trying to succeed in Silicon Valley.

Featuring a great ensemble cast comprising of Thomas Middleditch, TJ Miller, Kumail Nanjiani, and Martin Starr, Silicon Valley is a hilarious take on the startup ecosystem. It shows how challenging it can be for new entrepreneurs to make an impact in the competitive environment of Silicon Valley, despite having a game-changing product.

Silicon Valley has 6 seasons with a total of 53 episodes. The sixth season, which was the show’s last season, aired in October 2019 and the last episode aired on December 8, 2019.

This show was on my watchlist for the longest time. I finally managed to binge-watch all five seasons of the show in a week’s time, and then waited patiently for the final season to premiere. If you’re an entrepreneur, you’re going to find the plot super-relatable and you may end up binge-watching all the episodes as I did. Just make sure you start on a weekend.

Shark Tank is a business-related reality TV show where investment-seeking entrepreneurs make business presentations to a panel of five investors aka “sharks” who then choose whether to invest in their company as business partners. The show first premiered on August 9, 2009 as the American franchise of the international format Dragons’ Den (see #3).

Longstanding panel members of the show include business tycoons such as Mark Cuban, Barbara Corcoran, Kevin O’Leary, Daymond John, and Lori Greiner; while Richard Branson, Ashton Kutcher, and Chris Sacca have all appeared as guest sharks.

I’ve been a long-time watcher of this show and I’ve seen some of the best and the worst product pitches. But I watch it mainly to take notes on the product pitches that resonate with the sharks and trigger multiple offers.

Dragons’ Den originated in Japan in 2001, where the series was called The Tigers of Money. Local versions of the show have been produced in over 30 countries, but it’s the British version of the show called Dragons’ Den that’s considered the most popular and the series that inspired Mark Burnett to produce Shark Tank.

The premise of the show is similar to that of Shark Tank — budding entrepreneurs pitch their ideas to five investors aka “dragons” who then decide whether to invest in the product/service that they have just been pitched. The panel of investors typically includes successful entrepreneurs like Deborah Meaden, Peter Jones, Duncan Bannatyne, and Theo Paphitis.

To get a feel for the show and its unique format, watch a few pitches on the official Dragons’ Den YouTube channel.

You may already be familiar with Saul Goodman if you’ve watched Breaking Bad. Better Call Saul is a prequel to Breaking Bad and is centered on the character of Jimmy McGill aka Saul Goodman.

The show takes place six years before the events of Breaking Bad and shows the transformation of Jimmy McGill, a former scam artist, and small-time lawyer, into Saul Goodman, a lawyer who frequently represents criminals while himself becoming involved in the city’s criminal world.

Bob Odenkirk is absolutely brilliant as the lead and the supporting cast, comprising of Rhea Seehorn, Jonathan Banks, and Giancarlo Esposito, give stellar performances to make this a worthy spin-off to Breaking Bad.

Each season comprises of 10 episodes. The show is currently in its fifth season which premiered on February 23, 2020.

5. Planet of the Apps

Planet of the Apps – 10 Best TV Shows for Entrepreneurs

Planet of the Apps is just like Shark Tank, but for mobile apps. Software developers have 60 seconds to pitch the idea of their app in front of four judges (Jessica Alba, Gwyneth Paltrow, William Adams (aka will.i.am), and Gary Vaynerchuk) in hope to partner with one of them for six weeks.

This series was Apple’s first original TV series, but unfortunately, it was canceled after just one season. Though the series has been criticized for being self-indulgent, it’s still a fun watch with a lot of takeaways for app developers and tech entrepreneurs.

Where to watch: Apple TV

StartUp is a web drama series that follows the emergence of GenCoin, a brilliant yet controversial cryptocurrency startup. The series has a great ensemble cast featuring Adam Brody, Edi Gathegi, Otmara Marrero, Martin Freeman, Ron Perlman, Addison Timlin, and Mira Sorvino. While the first season of the show received a mixed response from critics (33% approval rating on Rotten Tomatoes), it has slowly gained loyal fans over the years.

There are currently 3 seasons of this series — with a total of 30 episodes. The fate of the show hangs in balance; it has not been renewed for a fourth season yet nor has it been canceled.

Aside from being wildly entertaining and binge-able, the show is filled with insightful quotes on business, startups, and leadership. Definitely a must-watch TV show for entrepreneurs.

The show currently has four seasons (48 episodes) and has been renewed for a fifth season.

You can watch a few clips of Billions on their official YouTube channel.

Where to watch: Showtime (US); Sky Atlantic (UK); Hotstar (India)

Ballers is a comedy-drama series starring Dwayne “The Rock” Johnson who plays Spencer Strasmore, a retired NFL player who must navigate his new career of choice as the financial manager of other NFL players. The show is critically acclaimed and has been called the NFL version of the show Entourage. Dwayne Johnson’s performance, in particular, has been praised by critics and fans alike.

Ballers has five seasons with a total of 47 episodes. The fifth and final season of the show premiered on August 25, 2019.

Where to watch: HBO (US); Sky Atlantic (UK); Hotstar (India)

Created by Lee Daniels and Danny Strong, Empire is a drama series that tells the story of Empire Entertainment, a fictional hip hop music and entertainment company, and the drama that unfolds among the members of the founders’ family as they fight for control of it.

The series has six seasons. The sixth and final season premiered on September 24, 2019.

Where to watch: FOX (US); Amazon Prime (UK); Hotstar (India)

Although I liked all episodes, my personal favorite was Payday (Season 1, Ep. #2) which revolves around amateur racing driver Scott Tucker and his fraudulent online business, AMG Services, which made payday loans with extremely high-interest rates.

Each season has 6 episodes and the most recent season, the show’s second season, premiered on March 11, 2020.

Where to watch: Netflix

Honorable Mentions Not satisfied with the recommendations above? Here are some more TV shows you can add to your watchlist:

Mad Men – This immensely popular drama series gave us one of the most iconic characters in television history, Don Draper, portrayed brilliantly by Jon Hamm. The show revolves around the fictional Sterling Cooper ad agency in New York in the 1960s and the personal and professional lives of people who work there. The series ended in 2015 after 7 seasons. You can binge-watch the entire show on Netflix.

Kitchen Nightmares – Celebrity chef Gordon Ramsay has had multiple shows on TV, but the one I’d recommend to entrepreneurs and business owners is the highly entertaining Kitchen Nightmares. Each episode, Ramsay spends one week at a failing restaurant in an attempt to revive their business. Pro Tip: Don’t miss the episode on Amy’s Baking Company which you can watch here on YouTube.

Mary Queen of Shops – Not many people know about this show, but it’s an absolute gem. Mary Queen of Shops is a retail-related business show by Mary Portas, a highly successful British retail consultant. In each episode, Portas troubleshoots her way around the UK on a mission to help turn around struggling retail stores and fashion boutiques. To get a feel for the show, watch this episode on YouTube.

That wraps up my list of must-watch TV shows for entrepreneurs. Are there any shows that you’d like to recommend to entrepreneurs and business owners? Let me know in the comments section.