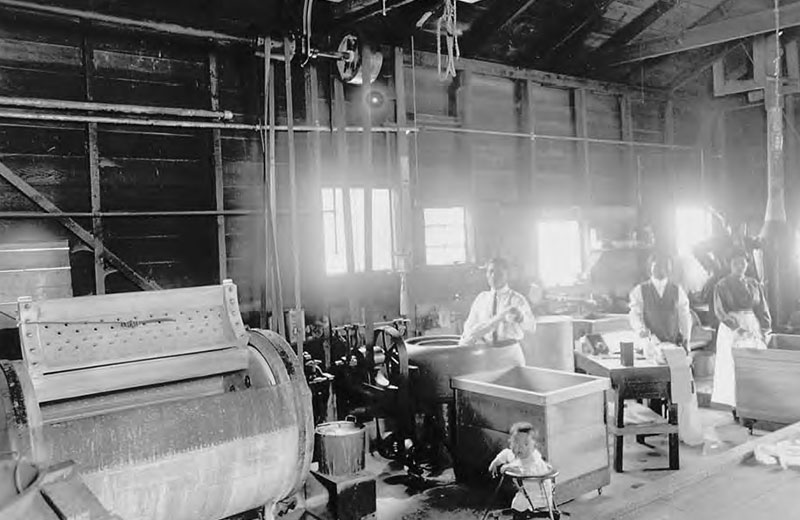 THE CHINESE LAUNDRY, ASIAN RACISM AND THE 1882 CHINESE EXCLUSION ACT

We don’t think much about Chinese discrimination in America; we tend to focus on Japanese Internment during WWII. Chinese discrimination goes back to the 19th century in the US after the Chinese were singled out for a tax on gold mining in California Gold Rush in 1848 where many Chinese immigrants first labored. Because of this discrimination by the State of California, many Chinese were forced to find alternative employment and went to work on the railroads. The Chinese population on the eve of the Chinese Exclusion Act of 1882 was about 200,000. That represents about 1/1000 of the US population at the time. Yet they were seen as taking away jobs from “Americans”.

The Chinese Exclusion’s Act of the Federal Government was passed by Congress with pressure from California and Pennsylvania. It excluded Chinese from migrating to the US and refused citizenship. Building on the earlier Page Act of 1875 which banned Chinese women from immigrating to the United States, the Chinese Exclusion Act was the first, and remains the only law to have been implemented, to prevent all members of a specific ethnic or national group from immigrating to the United States. The act was initially intended to last for 10 years, but was renewed and strengthened in 1892 with the Geary Act and made permanent in 1902. These laws attempted to stop all Chinese immigration into the United States for ten years, with exceptions for diplomats, teachers, students, merchants, and travelers. The laws were widely evaded. Any Chinese who left the United States had to obtain certifications for reentry, and the Act made Chinese immigrants permanent aliens by excluding them from U.S. citizenship. After the act’s passage, Chinese men in the U.S. had little chance of ever reuniting with their wives, or of starting families in their new abodes.

Amendments made in 1884 tightened the provisions that allowed previous immigrants to leave and return, and clarified that the law applied to ethnic Chinese regardless of their country of origin. The Scott Act (1888) expanded upon the Chinese Exclusion Act, prohibiting reentry into the U.S. after leaving. This wasn’t the last time the Chinese were singled out.

Have you ever heard of the Chinese laundry? When I was a kid, there was a Chinese laundry not far from my parent’s house on Long Island, NY. That’s where everyone brought their dress and sport shirts to be laundered and ironed. The shirts were folded and wrapped with brown paper and tied with string. Chinese laundries were ubiquitous; in New York alone there were over 3500 in the early 1930s. Because of discrimination, work in the laundries was one of the few avenues open to the Chinese. The law was aimed at taking jobs and wealth from the Chinese and passing it to “white workers and owners. With the support of white people in that same industry, in 1933 the New York City Board of Aldermen passed a law intended to drive the Chinese out of the business. Among other things, it limited ownership of laundries to United States citizens. When their efforts were unsuccessfully opposed by the Chinese Consolidated Benevolent Association, a “conservative Chinese social organization” the openly leftist Chinese Hand Laundry Alliance was formed. Where the Chinese Consolidated Benevolent Association failed, the Chinese Hand Laundry Alliance successfully challenged this provision of the law, thereby preserving the livelihood of thousands of Chinese laundry workers. In the wake of that success, the Chinese Hand Laundry Alliance continued to advocate for the civil rights of Chinese in North America. For both members and non-members, the cost to engage the aid of the organization was twenty-five cents. So, what ever happened to the Chinese laundries? The one in my neighborhood suddenly closed with no explanation and Chinese laundries across New York, for example began to disappear at an astonishing rate.

Again, why? Well during the early and mid-1950s there was what was called the Second Red Scare. The first Red Scare occurred at the end of WWI because of the Russian Revolution of 1917 that overthrew the Czar and tin effect ended the monarch in Russia by establishing the USSR (the Union of Soviet Socialist Republics), communism had arrived. The Palmer Raids were a series of raids conducted by the United States Department of Justice to capture, arrest and deport alleged radical leftists, especially anarchists, from the United States. The raids and arrests occurred in November 1919 and January 1920 under the leadership of Attorney General A. Mitchell Palmer. Germans, Southeastern Europeans and Italians were targeted. The Palmer Raids occurred in the larger context of the Red Scare, the term given to fear of and reaction against communist radicals in the U.S. in the years immediately following World War I. There were strikes that garnered national attention, race riots in more than 30 cities, and two sets of bombings in April and June 1919, including one bomb mailed to Palmer’s home. Most of the over 10,000 who Palmer rounded up and targeted for deportation never saw the light of day thanks to the Secretary of Labor, Louis Freeman Post, who investigated Palmer’s methods and found that there was little basis in fact for the deportations. Post canceled more than 2,000 warrants as being illegal. Of the 10,000 arrested, 3,500 were held by authorities in detention; 556 resident aliens were eventually deported under the Immigration Act of 1918. The Second Red Scare of the early and mid-1950s occurred after the end of WWII. The Us at the time was the only nation with nuclear weapons. Then on August 29, 1949 the Soviet Union conducted a successful nuclear explosion.

The US was stunned and because of the prejudice against communism announced that the Soviet Union was aided by nuclear spies in the US. Julius and Ethel Rosenberg were suddenly arrested as the spies that sent the secrets from our nuclear laboratory at Los Alamos New Mexico to a Soviet contact. The evidence was controversial and the alleged secrets, a hand drawn copy of a lens mold used to detonate a nuclear bomb was the “secret” that led to the Soviet success not their science. In 1995 documents were released that indicated that Julius was a courier for the USSR but what did he bring them was never documented. Their accuser, Ethel Rosenberg’s brother David Greenglass in 2001 recanted saying, “I frankly think my wife did the typing, but I don’t remember.” He stated he gave false testimony about the Rosenbergs to protect himself and his wife, Ruth, and that he was encouraged by the prosecution to do so. This led to Joe McCarthy, the chair of the Senate Committee on Government Operations. Included in McCarthy’s committee was the Senate Permanent Subcommittee on Investigations, and the mandate of this subcommittee was sufficiently flexible to allow McCarthy to use it for his own investigations of Communists in the government. McCarthy appointed Roy Cohn as chief counsel and 27-year-old Robert F. Kennedy as an assistant counsel to the subcommittee. The Committee overreached its authority and began to investigate Hollywood and the Screen Actors Guild for alleged ties to the Communist Party in the US. Many people’s lives were destroyed by McCarthy’s wild and far reaching yet unsubstantiated accusations. Now what does all of this have to do with Chinese Laundries? During the era of McCarthyism, the loyalties of over ten thousand American citizens of Chinese descent were questioned based on their ethnicity and alleged risk to national security.

Eventually, targeted by the Federal Bureau of Investigation during the Second Red Scare and faced with surveillance and interrogations, membership in the China Hand Laundry Alliance sharply declined. In the 1980 documentary The Chinatown Files: Henry Chin, a laundry worker and president of the Chinese Hand Laundry Alliance and the China Daily News, describes how Chinese immigrants came to America for a better life for themselves and the loved ones they left behind in their impoverished villages. Yet for sending money home, his friends were charged by the U.S. government for trading with the enemy and his life was shattered by constant FBI surveillance and harassment. In 1940, China Hand Laundry Alliance members began publishing their own newspaper, the China Daily News (a different publication from the China Daily News, a modern Traditional Chinese-language newspaper published in Tainan City, Taiwan). The only Chinese-language newspaper in the U.S. that was not pro-Nationalist, it attracted negative attention from the United States Government. In 1952 it was tried for violating the Trading with the Enemy Act, because employees continued to send remittances to China. Its editor and three officers of the paper were sent to prison for running an advertisement, posted by a mainland-Chinese bank, urging Overseas Chinese to repatriate money to relatives. So great was the belief that the publication promoted Communism, even the paper’s 6500 subscribers were investigated by the government. The CHLA continued its political and social struggles “against institutionalized racism and class oppression, tied to the fight for China’s self-determination”, Eventually people stopped going to Chinese laundries because of prejudice created by the Second Red Scare and the fear of association with alleged communists but that was not the only blow to this 100-year Chinese enterprise–the addition of the washing machine to every household was the final straw–new household technology signaled the end of an era.